Despite the crucial role migrant workers play in the functioning of economies, many governments formulate policies based on the notion that migration is a purely temporary phenomenon. These policies often work to reinforce the social exclusion of migrants and their families.

On Friday, 28 October 2016, the social inclusion of migrants and migrant returnees was collectively endorsed at the Mekong Migration Network’s (MMN’s) opening event of “Beyond ‘Tolerance’: Living Together with Migrants,” a photo exhibition and multimedia documentary, held at Myanmar Deitta gallery in Yangon.

“We need to create jobs that are useful for them [migrants] here. When they come back [to Myanmar] they usually can’t find any jobs and need to return. This becomes a cycle. We need to break this cycle,” U Kyaw Htwe, Amyotha Hluttaw MP and President of the Domestic and International Labour Committee, told the media at the event.

U Ko Ko Gyi, General Secretary and prominent leader of 88 Generation Peace and Open Society, stressed the need to recognize the skills that migrants gain abroad and apply these skills to the national development of Myanmar. In his presentation, U Ko Ko Gyi asserted, “Migrants are building this country. We must ensure that they are also building a better life.”

Ms. Jackie Pollock of ILO-Yangon spoke of the alienation felt by migrants in Singapore who are “looked down upon, pitied, and disrespected.” She explained, “The stigma runs so deep that women said they never told their families that they were domestic workers; they said they were teachers and shop workers.” Her presentation highlighted the exclusionary effects of temporary migration policies and the need to amend such policies in order to promote inclusion amongst migrant communities.

Representing the Cambodia Women’s Crisis Center – an MMN member organization – Mr. Sopheap Suong remarked on the similarities between the situation of migrant returnees in Myanmar and Cambodia, which include migrant returnees’ limited access to adequate health services and financial support and the lack of absentee voting systems.

Daw Thet Thet Aung of 88 Generation Peace and Open Society proposed recommendations to the Government of Myanmar, which are outlined in MMN’s Advocacy Paper titled: “Permanently Temporary: Examining the Impact of Social Exclusion on Mekong Migrants.” These recommendations include simplifying requirements to secure national identity cards, establishing more formal and appropriate educational provisions for migrants and their families, providing psycho-social and financial support, and recognizing the qualifications and certifying the skills acquired by migrants.

Daw Thiri concluded the presentations by sharing her experience migrating to Japan under the Technical Intern Training Program. After experiencing a reduction in her wage and breach of contract, Daw Thiri sued Myanmar employment agencies Htay Service and Myanmar Express Link as well as Japanese agents.

Around 70 audience members occupied Myanmar Deitta on Friday afternoon representing civil society organizations, labour unions, the Government of Myanmar, and the local press. The event included the launch of MMN’s Myanmar-language multimedia documentary and was succeeded by a two-day photo exhibition – both of which showcased images of migrants’ daily lives in Myanmar, Cambodia, Thailand, and Japan captured by documentary photographer Mr. John Hulme. 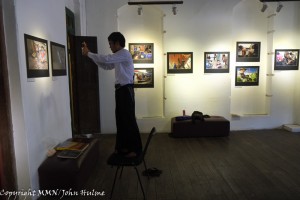 This event and exhibition were part of a wider project supported by the Toyota Foundation titled, “Beyond ‘Tolerance’: Working Hand-in-Hand to Promote the Social Inclusion of Migrants and Their Families.” The other major components of this project included country visits to Myanmar, Cambodia, Thailand, and Japan, talks and photo exhibitions in Bangkok and Phnom Penh, and the publication of “Permanently Temporary: Examining the Impact of Social Exclusion on Mekong Migrants.” 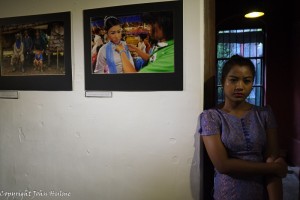 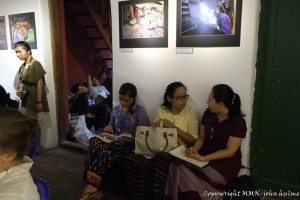