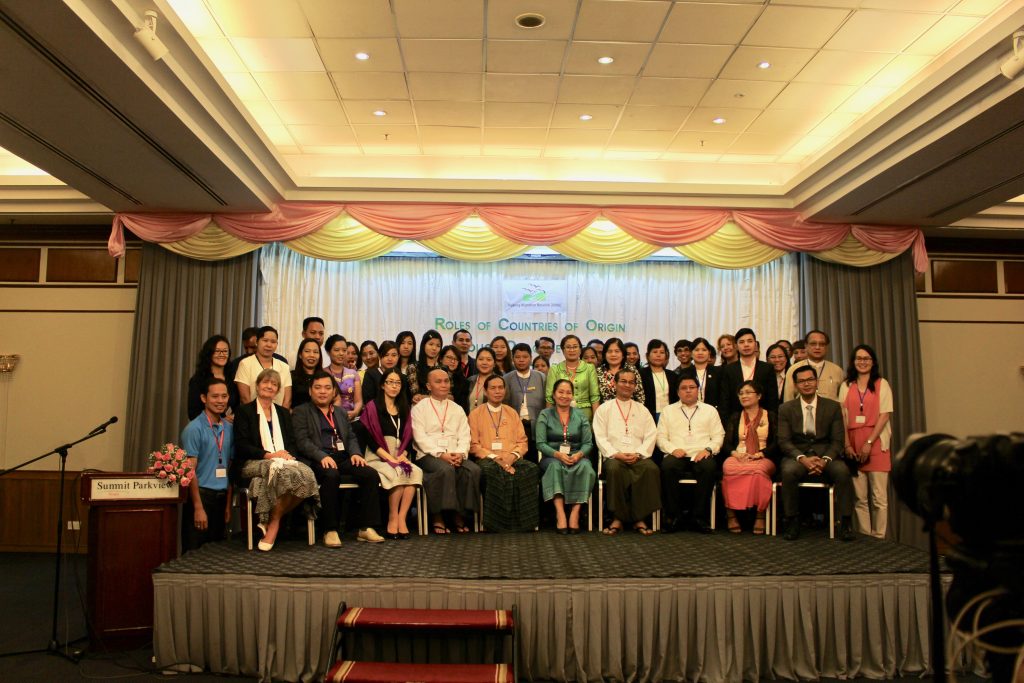 Today, MMN began its two-day conference on the role that countries of origin should play in protecting migrants. The conference brought together representatives from the Myanmar and Cambodia governments, private recruitment agencies, civil society and international organizations to discuss the topic and generate ways that Myanmar and Cambodia can improve their support for migrant workers.

The conference opened with speeches from the Director General of the Department of Labour in the Ministry of Labour, Immigration and Population of Myanmar, U Win Shein, and the Secretary of State of the Ministry of Interior of the Royal Kingdom of Cambodia, H.E. Ms. Chou Bun Eng. MMN regional coordinator Ms. Reiko Harima also addressed the conference.

U Win Shein emphasized that it was the responsibility of the country of origin to provide the conditions necessary to reduce poverty for migrants. He said that he was looking forward to the conference’s positive and active communication” in order to “provide better resources to protect migrant workers.”

Finally, Reiko Harima stressed that, “While destination countries must rightly bear the responsibility for the protection of migrant workers within their territory, countries of origin, nonetheless, have a crucial role to play by ensuring that their nationals are protected abroad and that they receive adequate pre-departure and reintegration assistance.” This is something that must be upheld for both documented and undocumented migrants.

After the opening ceremony, the panels began. The topics of the panels for day one were the following: migration mechanisms, information dissemination, regulation of recruitment agencies and overseas assistance. In each panel, MMN first presented its findings and recommendations from the report. Next, panelists were invited to respond with their own impressions and suggestions.

In the first panel on migration mechanisms, MMN recommended that documentation processes be simplified so that they do not create an additional burden for migrant workers. This includes shortening the processing times and reducing the costs, which both deter migrants from seeking documentation. MMN also advocated for origin countries to negotiate with destination countries to improve working conditions and ensure that labor rights are being protected. Thirdly, MMN recommended that governments expand their capacity to receive and effectively resolve complaints from migrants about their working conditions. Panelists suggested that origin countries negotiate with destination countries to allow migrants to collectively bargain. Others noted that it is extremely difficult for migrants to access information regarding migration mechanisms in both the origin and destination countries. Ms. Jackie Pollock of the ILO introduced the idea of implementing a system of direct hire of migrant workers; an organization such as the IOM or trade unions facilitating the migration process; and creating a regional code of conduct.

On information dissemination, MMN recommended that countries of origins expand their efforts to provide accurate, unbiased information to migrants. MMN also recommended that the quality of pre-departure training be improved and that its delivery be expanded. Many panelists said that social media, particularly Facebook, was a preferred medium for reaching migrants, as it could easily reach the greatest number of migrants for the cheapest cost. Ms. Wai Hnin Po, the National Project Coordinator for the International Labour Organisation, said that Myanmar can learn from the women’s exchange groups in Thailand, as one way of effectively sharing information with migrants, and that countries of origin should tap into the social networks that migrants have created themselves to effectively spread information. During the discussion, one participant asked the conference to remember that there are several million migrants already in destination countries and that reliable information must also be disseminated to them as well, not just those who have yet to migrate.

For the regulation of recruitment agencies, MMN advocated for effective implementation of monitoring mechanisms, arguing that many laws exist in name only and are not meaningful. Mr. Chuop Narath, the Deputy General Director of the Labour Department, within the Ministry of Labour and Vocational Training of Cambodia, recognized that his department still received complaints from migrants traveling through legal channels. Mr. Pin Vireak, the Executive Director of the Association of Cambodian Recruitment Agencies, said that his organization worked closely with the ILO to develop curriculum for pre-departure training. He also suggested that the government take a greater role in regulating advertisements from recruitment agencies. Finally, he agreed with the MMN recommendation about setting up standard recruitment fees and that ACRA should consider how to implement and manage such a fee.

In the final panel of the day, MMN recommended that origin countries allocate sufficient staff and budget to supporting migrants abroad through their embassies and consulates and beyond. MMN specifically highlighted the need for continued outreach to workers after migration from origin country resources and the need for greater collaboration between CSOs in destination countries and embassy/consular staff in supporting migrant communities. As part of this panel, Mr. Jan Michael Gomez from the Philippines Embassy in Yangon shared best practices from his country. He noted that there are several funds specifically allocated for supporting migrant workers, including hiring legal assistance, and that the Philippines is one of the only countries in the world to have a Deputy Minister for Foreign Affairs for Migrant Workers.

The day concluded with small group discussions on each of the four topics, with each group deciding ways that all stakeholders can move forward in supporting migrants in their home countries.

The group discussing migration mechanisms recommended that bilateral agreements be promoted as their binding nature could help secure desired outcomes to protect migrants. It also said that Cambodia and Myanmar should partner to collectively bargain with Thailand. The group discussing information dissemination suggest regional campaigns for safe migration and having each state use state media to share information. The group discussing regulation of recruitment agencies advocated for a regional code of conduct for recruitment agencies and more training for workers and employers alike. Finally, the group discussing overseas assistance suggested that origin countries increase the number of one stop service centres and labor attaché offices, as well as collaborate more with CSOs.

As part of the conference, MMN also launched its new publication, “Safe from the Start: The Roles of Countries of Origin in Protecting Migrants,” which includes all of the recommendations referred to above. It is the culmination of a multi-year study which evaluated into the existing institutions that support migrant workers in countries of origin through consultations with migrants in both destination and origin countries, interviews with stakeholders and examination of government laws and policies.

The English version of the report can be accessed at the link here. The Burmese version can be found here and the Khmer version here.

The video of the opening ceremony can be found below: