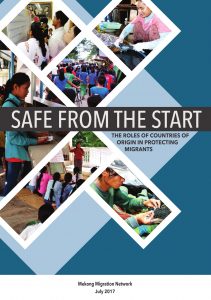 MMN’s most recent publication focuses on the role that countries of origin should play in protecting their nationals migrating abroad from pre-departure, through overseas assistance, to return and reintegration. Through a case study of the measures taken by the governments of the Philippines and Indonesia to protect their nationals migrating to Hong Kong, the report takes stock of the lessons to be learned from the experiences of these longstanding countries of origin. Through the lens of this case study, the report examines the shortcomings and gaps that exist in the current policy and practice of Myanmar and Cambodia, the two main labour surplus countries in the Greater Mekong Subregion. This comparative analysis is instructive as it has allowed MMN to develop recommendations aimed at protecting the rights and well-being of migrants within the framework of the sub-region’s nascent migration governance systems.

Published in July 2017. PDF available at:

English version: Safe from the Start_English

Burmese version: Safe from the Start_Burmese

Khmer version: Safe from the Start_Khmer