The ASEAN Civil Society Conference/ASEAN Peoples’ Forum (ACSC/APF) 2017 took place at the University of the Philippines, Diliman, Quezon City, Philippines from 10-14 November 2017 and adopted the theme of “Beyond Boundaries: Strengthening Peoples’ Solidarities for a Just, Equitable, and Humane Southeast Asia.” Although this year marks the 50th Anniversary of ASEAN, civil society across the region continue to be excluded from ASEAN development and high-level decision-making processes. For more information about ACSC/APF 2017, please visit: http://www.acsc-apf.org/index.html.

On Saturday 11 November 2017, the Mekong Migration Network (MMN) Secretariat facilitated a workshop in collaboration with partner organisations, including Legal Support for Children and Women (LSCW) from Cambodia, Future Light Center (FLC) from Myanmar, and Foundation for Education and Development (FED) from Thailand, as part of the Labor Mobility and Mixed Migration Convergence Space.

The MMN workshop was titled: “Bottom of ASEAN: Examining the impact of the precarious status and work of migrant workers and their families.” The main objectives of this workshop included: (1) to generate critical discussion on how current economic models and labour migration policies in the Greater Mekong Subregion and ASEAN are creating precarious situations for and further marginalising migrant workers across the region; and (2) to provide a space for participants to jointly strategise and develop recommendations for alternative development models that increase protections, including both social and labour protections, for all migrant workers and their families.

Approximately 30 participants attended the workshop representing CSOs from several ASEAN countries, including Cambodia, Lao PDR, Malaysia, Myanmar, Philippines, Thailand, and Vietnam. The workshop commenced with an interactive activity that required participants to discuss labour rights issues in groups with people from their respective countries and report back to all of the participants. During this activity, participants listed the top 3 lowest paying sectors in their country and whether workers in each of these sectors typically have written contracts, receive at least minimum wage, are covered by labour law protections, receive maternity protections, and have access to social security. In addition, participants jointly compared labour rights situations between countries of origin and destination. It was interesting to see that jobs in the informal sector were identified as some of the lowest paying occupations across all of the countries and that workers in these positions generally are not covered by many labour protections.

The activity was followed by a panel discussion on the impacts of the precarious status and work of Mekong migrant workers and their families in the context of ASEAN. Ms. Ei Ei Chaw, Deputy Director of Foundation for Education and Development (FED), Thailand, made the first presentation. Ms. Ei Ei Chaw highlighted the situations and challenges faced by migrants and their children in Thailand, such as the difficulties and limitations involved in registering under Thailand’s migration policies, the lack of information, interpretation and consular services provided by migrants’ countries of origin, and the exclusion migrants face from accessing labour protections. Ms. Ei Ei Chaw also emphasised the fact that migrant children in Thailand are at risk of becoming workers themselves at a young age as a result of their parents’ low wages, the limited enforcement of labour laws, and the challenges associated with accessing education due to Thailand’s restrictive migration policies. Given this situation, FED is working to encourage migrant workers to establish community-based organisations to disseminate information on migration policy as well as to submit recommendations concerning migration issues to the Myanmar Embassy.

Ms. Thet Thet Aung, Director of Future Light Center (FLC), Myanmar, was the next panelist. Ms. Thet Thet Aung presented on the development and legislation of Special economic Zones (SEZs) in Myanmar. SEZ development in Myanmar was initiated in the late 2000s and has impacted workers in terms of their labour rights and occupational health and safety. Thilawa SEZ is located on the outskirts of Yangon and has been fully operational since 2016. There are two other SEZs in Myanmar – Dawei SEZ in Tanintharyi Region and Kyaukphyu SEZ in Rakhine State – that are still in the process of being developed and negotiated between governments and investors. Ms. Thet Thet Aung emphasised that the SEZ law exists for economic reasons and not for the protection of workers. She explained that workers in the zones are often faced with precarious situations and lack labour protections. For example, some workers in these spaces do not have an employment contract, get paid less than the minimum wage, are not allowed to form unions, have to work long hours, and do not receive occupational health and safety training. Ms. Thet Thet Aung demanded for the laws governing the SEZs to be in line with sustainable development frameworks and labour protections.

Mr. Kimly Lov, a project officer from Legal Support for Children and Women (LSCW), Cambodia, was the next panelist. Mr. Kimly’s presentation covered the challenges faced by Cambodian women workers, particularly those working in the construction sector, which is one of the most precarious jobs available to women workers in Cambodia. In Cambodia’s construction sector, approximately 20-30% of workers are women, however women workers in this sector disproportionately experience inequality and discrimination, labour rights violations, and a lack of access to occupational safety and health protections. Mr. Kimly noted that given the tension that exists between workers and their employers and the fear of losing their jobs, it is challenging for women workers to advocate for their rights for social and labour protections.

At the end of the workshop, participants jointly agreed on key words to take into consideration when formulating recommendations for the Convergence Space on Labor Mobility and Mixed Migration. These key terms addressed the need for all migrants, including their dependents, to be covered by social protections in destination countries. They also highlighted the need for countries of origin to better protect their nationals abroad; for greater collaboration between origin and destination countries in the development of labour migration policies; and for stronger advocacy on the rights of all migrants regardless of their status.

The recommendations that emerged from each of the 3 workshops and 1 open space of Labor Mobility and Mixed Migration Convergence Space were presented, discussed, and consolidated during a Convergence Space Assembly in the morning of Monday 13 November. This refined list of recommendations was presented during a plenary discussion and collectively incorporated into a statement with recommendations from each of the 5 Convergence Spaces (which covered the topics of: Corporate Greed & Power, Peace Building & Human Security, Life with Dignity, Human Rights & Access to Justice, and Labor Mobility & Mixed Migration). During the conference, MMN delegates attended other workshops to advocate for the inclusion of recommendations related to labour migration supported by the network. The final version of the statement that emerged from 3 days of workshops and discussions can be downloaded here.

Throughout the APF, MMN ran a booth where MMN fliers and publications were distributed and posters were displayed depicting the situation of labour migration within the Greater Mekong Subregion. On the last evening of the conference, MMN delegates took to the streets of Quezon City as part of a Solidarity March to collectively raise our voices in a display of ASEAN people’s solidarity. 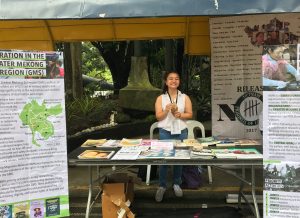 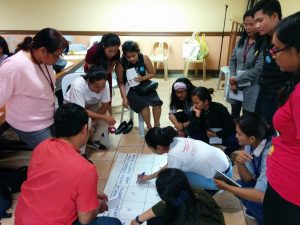 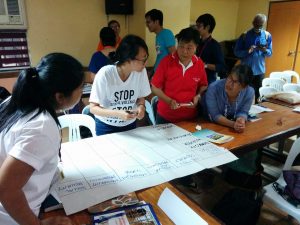 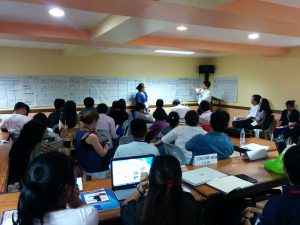 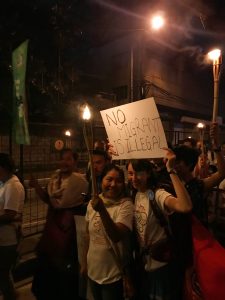 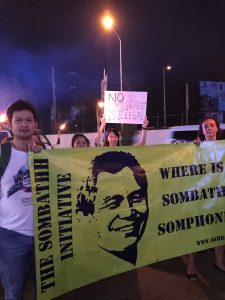 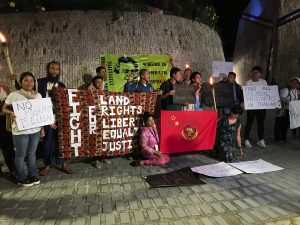 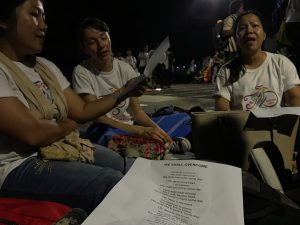 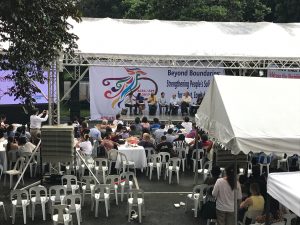 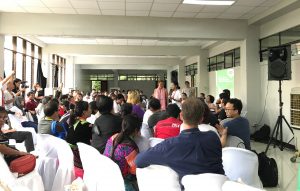 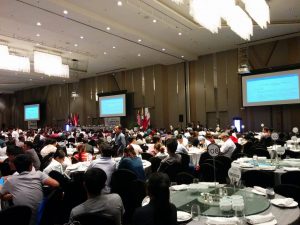 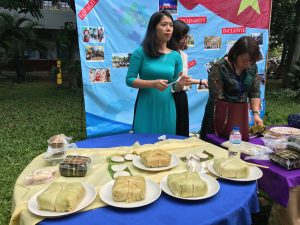 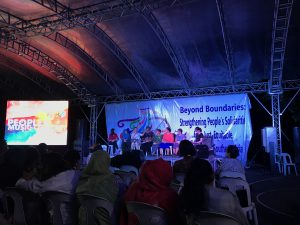 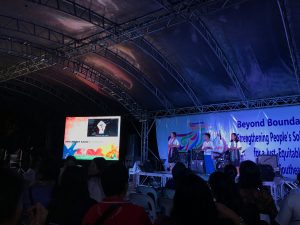 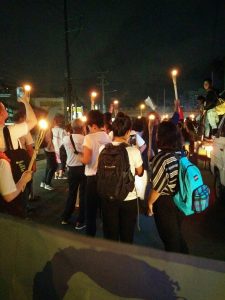 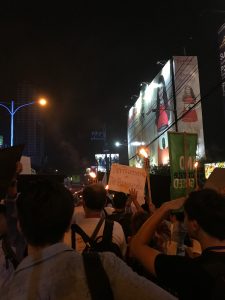 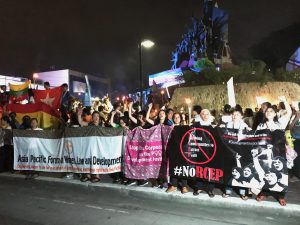