At the beginning of August 2013, a group of French volunteers from CCFD travelled to Thailand to visit their partner organizations in the region, including MMN and MAP. Their journey was a chance to discover more about the work of their partners, as well as to learn about migration issues and the experiences of migrant workers in the Mekong, and to share these experiences upon their return to France in order to increase awareness and understanding of migration issues in their own community.

On 5 August 2013, their first day in Chiang Mai, the MMN Secretariat presented the background and context of migration in the Mekong, as well as an analysis of migration policies, implementation gaps and the potentially negative effects such policies can have on migrants’ experiences in reality. This was followed by the work of MMN, including recent publications, current projects and achievements over the 10 years of MMN’s existence. The CCFD volunteers discussed their particular interest in migration – they come from the northern region of France, where many undocumented migrants live whilst trying to make their way to the UK, often to seek asylum. By gaining a better understanding of the migration in the Mekong, the CCFD volunteers were able to reflect on the problems with the practices and policies surrounding migration in France.

In the evening, the volunteers accompanied MMN and MAP to a Shan migrant community outside Chiang Mai, where the local Thai villagers have instituted a curfew and a tax on migrant households. That evening the Shan migrants had a village meeting to discuss their concerns and the possibility of taking legal action with the assistance of MAP. Despite the serious theme of the meeting, the evening ended with music and delicious Shan food. 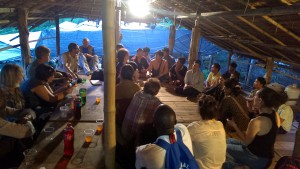 After several days in Mae Sot, on 13 August 2013, the CCFD volunteers returned to Chiang Mai and held a debriefing session to discuss their experiences together with MMN, MAP and KWAT (Kachin Women’s Association Thailand). The feedback from the CCFD volunteers was that they particularly appreciated the opportunity to speak with migrants, such as the visit to the Shan village on their first day. This was also an opportunity to ask further questions and discuss future projects of MMN, as well as exchanging contact details in order to keep in touch.

To read about the experience of the CCFD volunteers who travelled to Thailand in their own words, please see the CCFD blog “Les migrants géants” (Giant migrants): http://blog.ccfd-terresolidaire.org/npcpca/post/2013/08/05/Des-mi-grants-g%C3%A9ants